Fall saw me switching gears pretty radically from power armor to organic. I wanted to make Tyranids work in 7th edition. They where dog meat and not at all competitive but as my first 40k army I wanted to make Nids great again! Ahem. So I designed a list started to playtest it over the end of summer. Tweaked it a bit come early Fall and cemented it pretty shortly after that. I painted up nearly 1800 points of a Tyranids in 2.5 months. Was a speed run to be sure. The purple I originally used on my scheme no longer exists so I took the opportunity to step up the Tyranid scheme and improve on it.

Next locked down list item was a pair of  Malethropes to provide Alpha strike defense and synapse to the ground pounders. 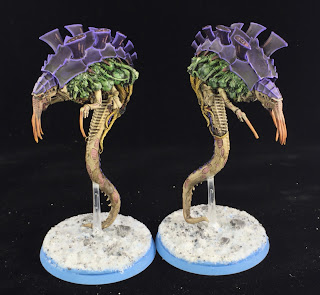 Next up I painted 6 forgeworld Meiotic Spores to be used as Myciloid Spores. I only needed 3 but figured I would just paint them all up in a batch. Used an airbrush and ghost tints to apply some faded coloration across the model. Worked really well. 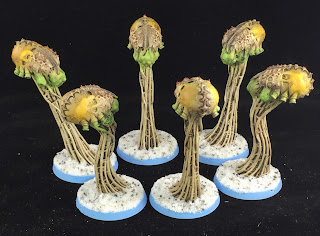 Next I finalized on 3 Flyrants as the poular(?!) unit was known as. About the only effective unit in the codex at the time. For the wings I actually airbrushed in a red ghost tint lightly over the skeletal bone. Turned them a nice pink. I put more coats into the center mass of the wings. Then when applying the wash by hand I would let it dry 5-10 minutes then using airbrush thinner on a brush I would apply that to the center mass of the wings fading the thinner out to the bones in the membrane. Have it a nice transition  of color without to much spotting from the wash staining the wings. 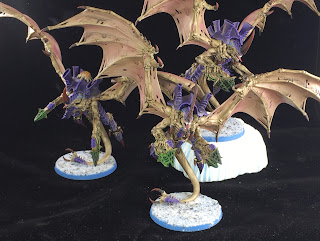 I landed on a pair of Hive Crones to compliment the Tyrants. They provided some AA as well as some high strength AP 2 via vector strikes. I used the airbrush to do the green on the mouths. i Wanted them to be strikingly visually distinct from the Harpy models to my opponent. 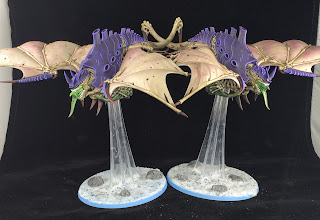 I finished out the list by repainting (ran out of time) a trio of Tyranid Warriors to the new scheme. Just touched up the carapace, teeth and eyes. 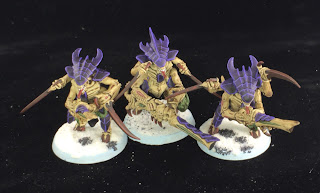 The D6 Generation - Dice Are Our Vice (D6G Podcast)